Both melee and ranged weaponry add damage to attacks. On a successful Hit Roll, a weapon adds Wild Pips to STRENGTH for the Damage Roll. A ranged weapon adds its Pips to ALL of the dice rolled.

Damage Rolls are resisted with the STRENGTH Attribute or its skill, Stamina. Armor adds Wild Dice to the Stamina Roll for resisting Damage, but for all other purposes, such as long-distance travel or other exertion, it lowers Stamina. Armor also reduces Swim, Sneak, and any Spellcasting skills.

Only Armor, not Helms or Shields, applies any pips for Quality or Magic to Stamina Rolls. 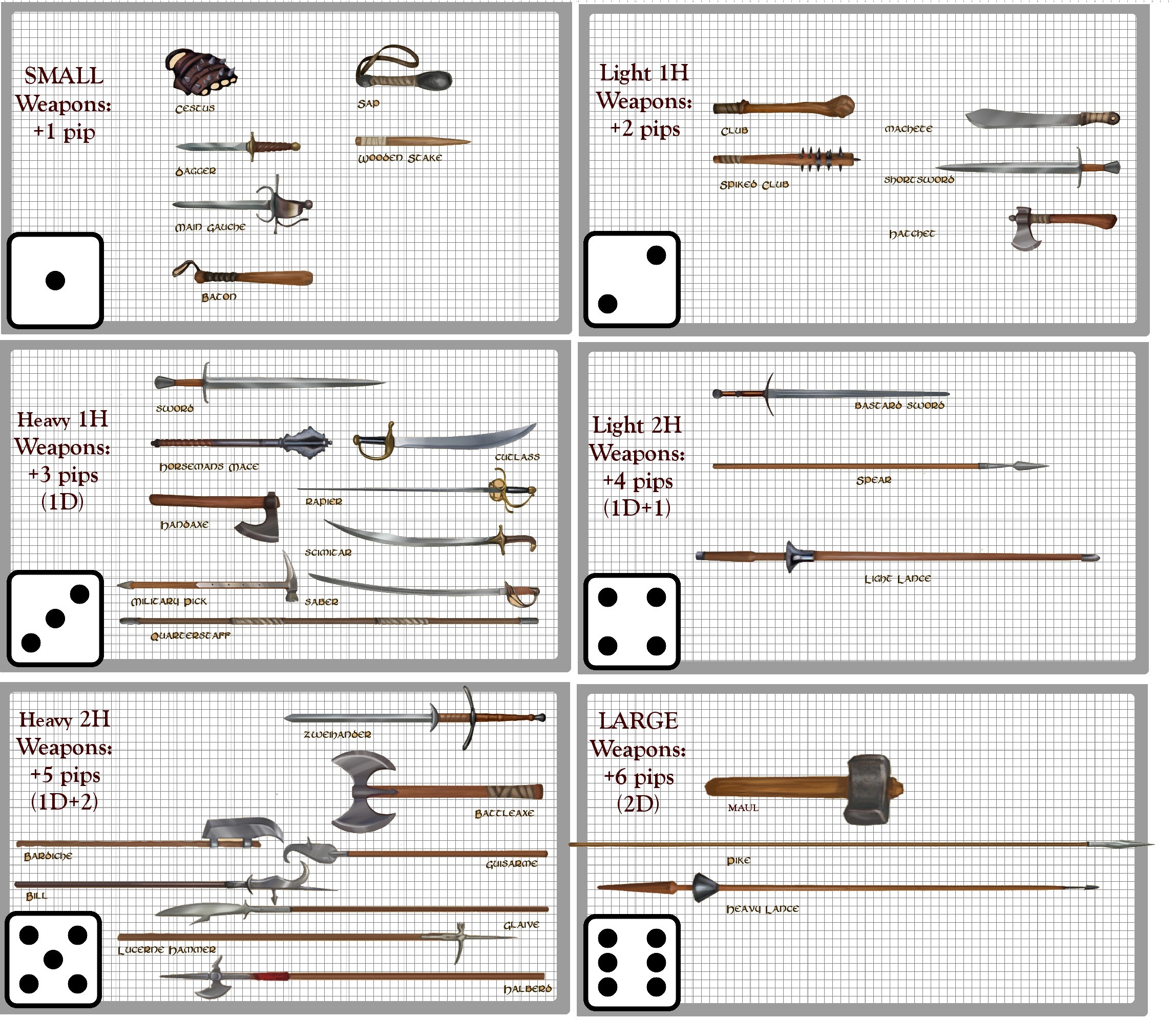 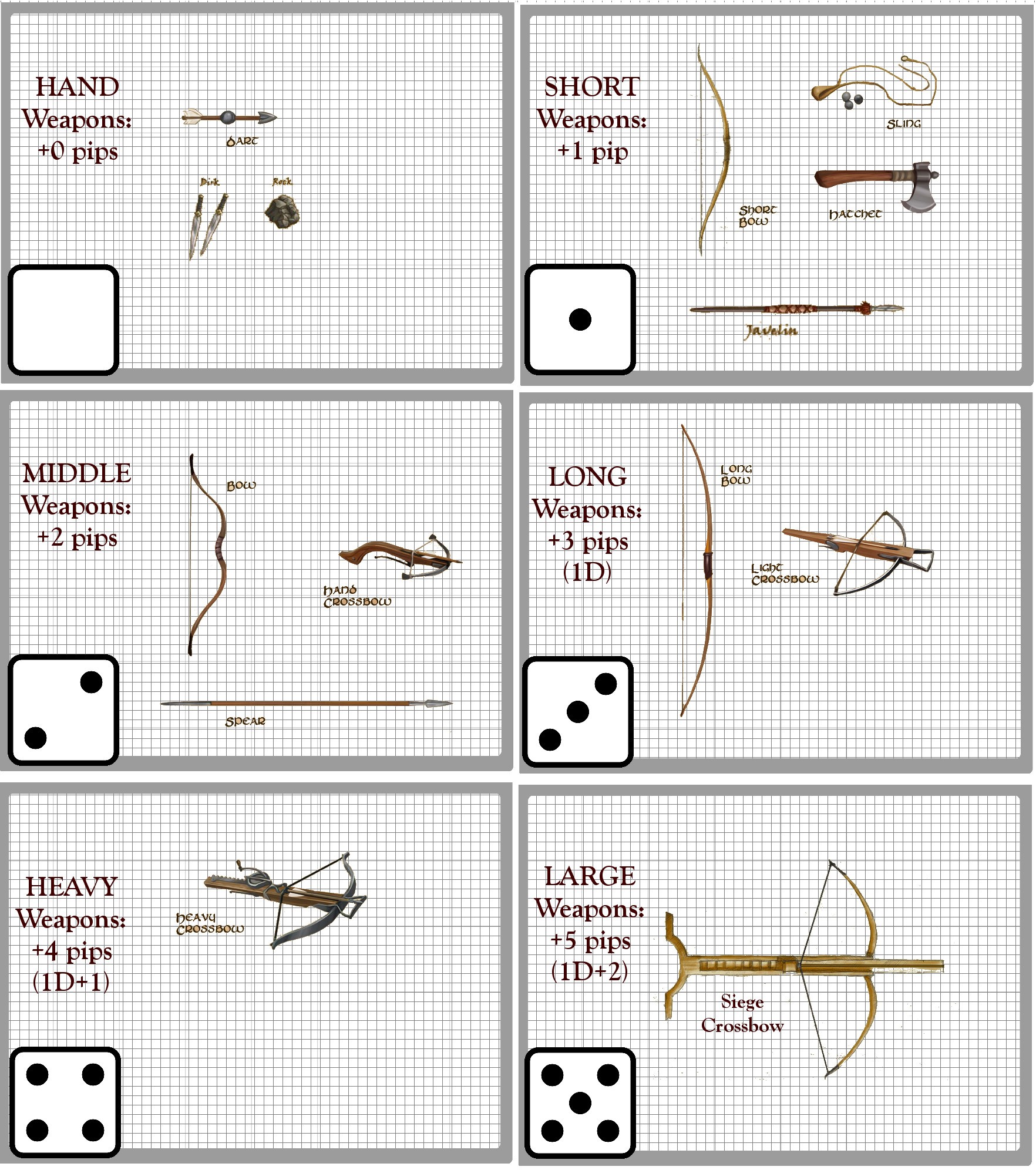 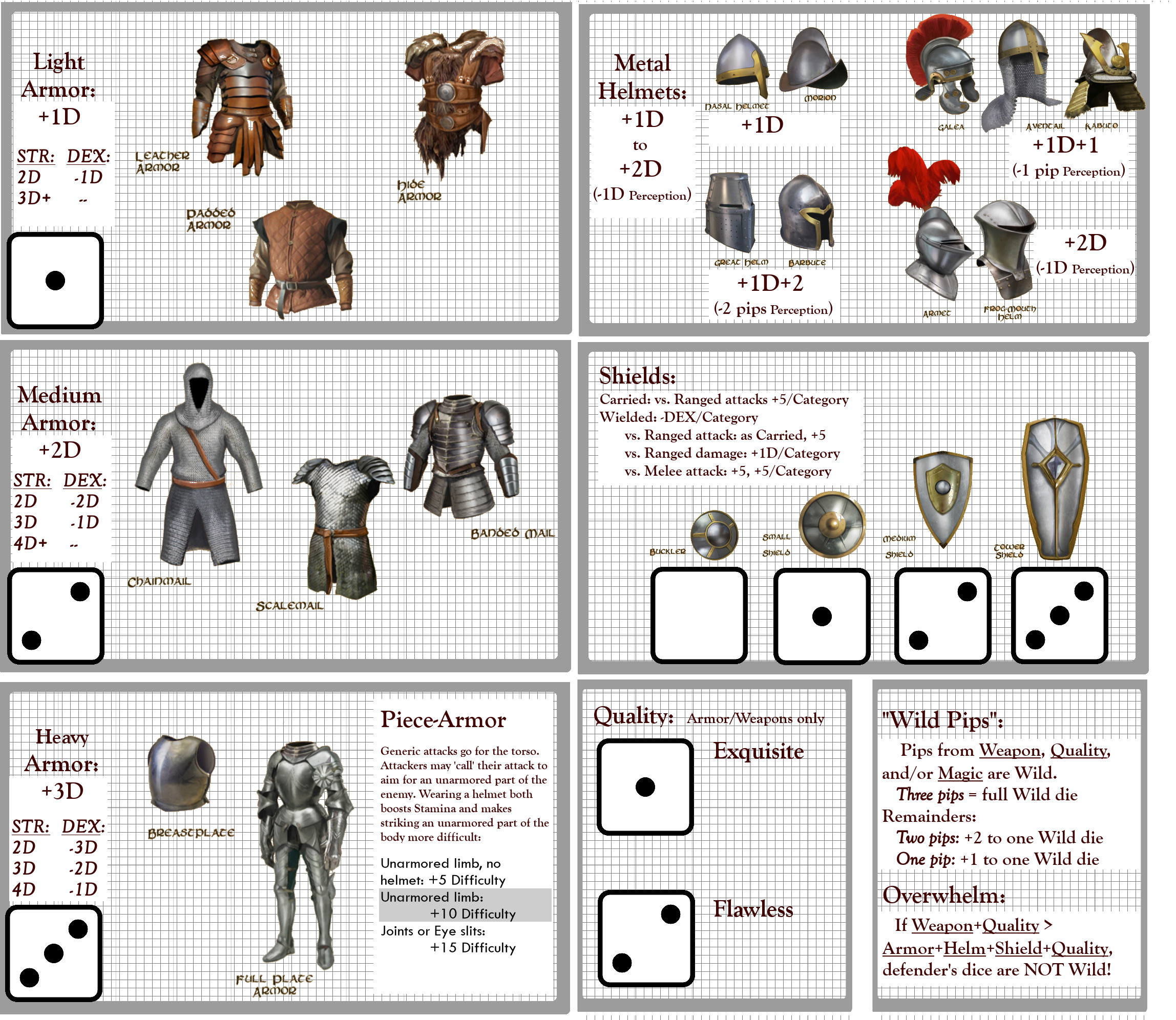 Although bows are muscle-powered, crossbows (Hand, Light, Heavy, Siege) can be manufactured as Small, Medium, or Large. This property determines the number of damage dice rolled and the STR Difficulty of "spanning" the crossbow. It will always take at least one combat round (~6 seconds) to span a new bolt for a crossbow weapon; if the Difficulty target is missed, each "5" or fraction thereof adds an additional round to the reload time.Characters may NOT attempt more than one "Spanning" action in one combat round. Note that use of proper equipment, where necessary, is presumed: winches, windlasses, etc.

Siege Crossbows require one crewman for each Die of Damage indicated; only the strongest crewman rolls STR to reload.

Dwarves possess a unique racial trait, Armorskill. Dwarven Runeseers do not suffer penalties to their Priesthood casting skill from wearing armor. Additionally, Dwarven Stamina is not reduced, for purposes of exhaustion, below their STR attribute by their armor.

When an attacking Weapon has more Wild Pips, from Quality+Weapon+Magic, than an opponent has defending Armor+Helm+Shield Dice, plus the Armor's Quality & Magic Pips, the defender's Armor does not protect as well: the Armor Dice added to the defender's Stamina Roll are NOT Wild!

OVERWHELM Example: Defender has Mail (2), Helm(1) & wields a Medium Shield(2) (total 5). Defender is only Overwhelmed (converting Armor Dice to non-Wild Dice) by heavy, two-handed weapons (+6 pips). If the defender drops his Shield (total 3), the armor is Overwhelmed by any two-handed weapon (+4 pips or more). A different, identical defender with Mail Armor of Exquisite Quality and +1 Magic Blessing has these Wild Pips count as +2 themselves (total 5 without Shield).